New!
The Sella Pilota club now has a really first-class website with all the results, fixtures and photos. This is the link:

… and even though it´s in Valencian, the Google translator should render it understandable.

Recent victories include a 10-6 win over Parcent, turning the game around from 0-5, and a whole string of victories in that morning´s Youth Tournament against Campello, in which Sella won 6 out of the 8 games.
Pilota Valenciana
More or less from March through to November the main Square in Sella is often taken over at the weekend by fiercely cotested games of our national sport – Pilota Valenciana.It´s an ancient street game at which Sella, a very small village, excels at all levels. The action is a bit like tennis combined with squash and fives…. There´s an explanation below and a link to a rather learned history of the game. 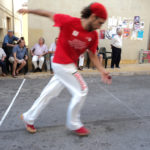 In Sella we play nearly all the different versions of the game of Pilota Valenciana ( llargues, palma, perxa, galotxa, frontó, raspall, escala I corda…) but mainly we  play the three versions  of the game played with lines drawn:

A Llargues: The version ofStreet Pilota Valenciana  in which the ball is served at the opposing team either on the volley or on the first bounce, scoring 15 when the ball crosses the  line marking the limit of play.

A Palma:  The version with identical rules to the “llargues” game but  making the serve  always from below. In the “ Palma” game, the player serves facing the opposition and hits the ball with the hand completely open, having made a semi-circular motion with his arm.

A Perxa: The version of the street game  in which the service must be taken from above a mark (usually a string) on the wall, before starting the serve: as from that point it is played the same as in the two previous games.

*In these versions the ball used is a Pilota de badana, a ball made from sheepskin,  which has always been  used in the street games because  it´s cheaper than a leather ball ( used in the Trinquet versions) The object of these games is always to win “rattles”, lines,  which you do by winning the first or second fifteen  after you serve one or two successful lines. You play up to 10 games and the score is like in tennis; fifteen, thirty, forty, game.

The teams in the Club de Pilota de Sella play in the Palma and Llargues Leagues in the Plaça Major de Sella from the beginning of March until the month of July. Also, from August to November we play in the Perxa League. As well as this, in the course of the year, there are many  games in the Fiestas or other competitions in which our players participate.  Of especial importance is the Sella Fiesta Game, the first Tuesday in October in which the best players in the Land of Valencia take part and you could say that this is probably the most important game of the year.

(*NB: if the descriptions of the procedure above  don´t seem too clear, blame the translator!) 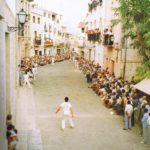 Looking down towards Paco´s bar 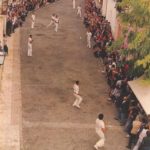 The Fiesta game one October

Towards the Church and casino bar 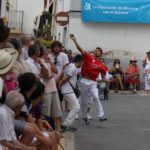 …and to end up, here´s some history, the backstory behind Valencia´s national Sport.

Pilota is a sport  which has been played since time immemorial  by peoples as diverse as the Mayas, the Egyptians and the Japanese. Here in the country of Valencia, it began, as did so many other  important parts of our culture, with the Greco-Roman tradition. Spread by Roman soldiers, the game was played in France, Belgium, Italy and in the Iberian peninsular throughout the Middle Ages with different versions equivalent to what today is termed “llargues” or “ escala i corda”, according to whether the playing area was  open or enclosed.

In the Kingdom of Aragón, the game of Pilota was very popular even enjoying Royal patronage or being regularly prohibited in various towns, an indication of how little notice was taken of such prohibitions.

In the Land of Valencia the game  first appeared  with the Knights of the Reconquest, participation and popularity extending  from the King himself through the nobility, the priesthood and down to the people and the  most humble in every street. The Castillian Kings and nobles,  as always  following the fashions from across the Pyrenees,  also became fans and players of the game which was, through the fifteenth, sixteenth, seventeenth and eighteenth centuries the most played game  among both the aristocracy and the people.  Limitations, fines and prohibitions together with the appearance of new entertainments caused the  game of Pilota to lose importance  bit by bit until in the end it disappeared entirely from Cataluña, Castilla, Aragon and the Balearic Islands in the course of then eighteenth and nineteenth centuries.. The situation in the Land of Valencia was very different: the prohibitions on playing the game in the street didn´t affect the game played in the Trinquet (a purpose-built hall for Pilota) which remained a vigorous sport  across the centuries and was practiced by  the flower of Valencian nobility- It managed  to keep strong right up to the modern-day, Trinquet version and street version, side by side.